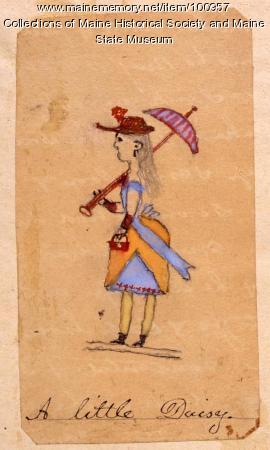 John Martin (1823-1904), who was working as an accountant at Katahdin Iron Works in Piscataquis County, drew this illustration of an 11-year-old girl, whose name he could not remember, who was the step-daughter Alex Morrison, of one of the workers at the Iron Works.

Martin wrote that the girl's mother was ill and became an invalid and, "this little girl assumed the house work cooked nice bread, meats, pies, cakes &co & found time to attend school, also washed & done up the family clothing. Her younger brother often came to my chamber to see me draw & paint the Iron works & I soon found he had a natural tact for drawing."

Martin was writing and illustrating a "scrapbook" in which he recounted his experiences at the Iron Works and looked back at various episodes in his life. It was one of three scrapbooks and a journal he wrote about his life and surroundings. "Daisy" is on page 112 of the scrapbook he wrote beginning in 1888.

Martin, who had three daughters, wrote, "She managed to save money & bought her a nice album & wanted me to draw her home in it & write a poem which I did. & In the course of time She made a beautiful hanging ornament of tisue paper of various colors ... & put her name in it & with some other little girls came to my room when I was gone
& hung it up over my sink in my room."