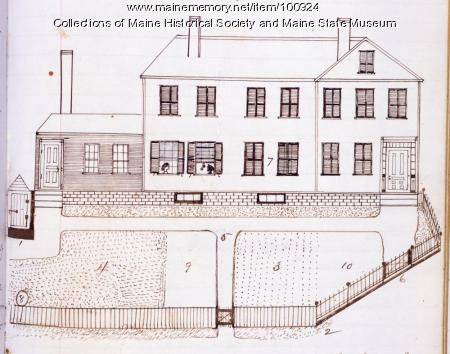 John Martin (1823-1904) drew this illustration of the Harris House in Bangor, where he and his wife, Clara, moved a few months after they were married in 1850. They had lived in Martin's former quarters in the Rufus Prince house.

Martin described this as his first "real home" since he left his parents house in 1835 when he began several apprenticeships and lived in the homes of his employers.

He wrote that the house, later known as the Veazie House, was where "Clara cooked her fist meal" and was the birthplace of their first child, Ada.

The illustration is on page 369 of a journal Martin wrote and illustrated in 1864 recollecting his life's experiences. The illustration shows the south side and eastern front end of the house. He wrote that it was located at the "Bangor Olde Town & Millford Switch and crossing on Market Street."

He drew the house as it looked before Samuel Veazie added a shed and made other changes when he began using it as his winter residence in about 1861. Martin noted that Reuben Bagley built the house in 1836.