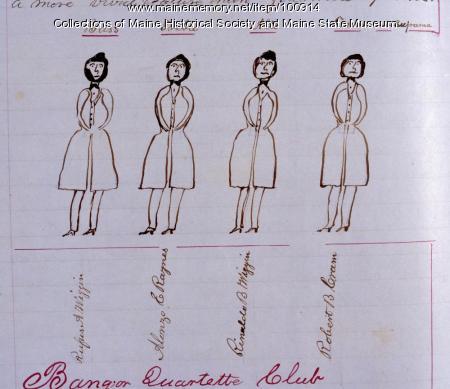 John Martin (1823-1904) drew this facsimile of the four members of the Quartette Club as they appeared in 1849, "about the height of their notoriety."

The illustration is from Martin's journal, which he began in 1864, writing about his life and experiences in the Bangor area. He wanted his wife and children to know more about him and how things worked and looked at the time he was growing up and was first in business. Martin worked as an accountant and shopkeeper.

The members of the group are, from left, Rufus Wiggin, bass; Alonzo E. Raynes, treble; Rinaldo B. Wiggin, tenor; and Robert B. Cram, suprema.

At the time Martin made the drawing, Rufus Wiggin was about 22, Raynes, Martin's half-brother, was 17; Rinaldo Wiggin was 18, and Robert Cram was 22. Martin described their outfits as "a buff vest, a buff set of Nankeen pants & each
a thin hat shaped ... with a black band and long ends to the bands. ... Their first collars were turn down all uniform but
a stand up dickey came in fashion and they made their debut on them at the Town house Hampden which has been in fashion to this day & I have one of them on now while writing this description."

The drawing is one of two Martin made of the group. This one appears on page 264 of the journal.