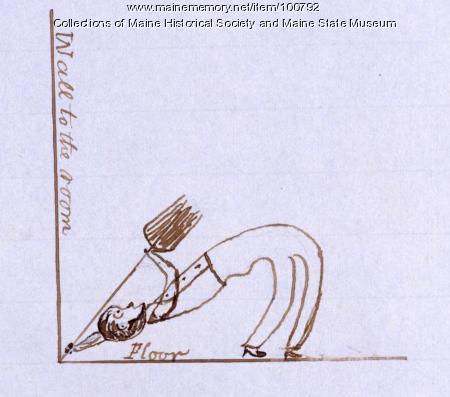 John Martin (1823-1904) drew an illustration of himself doing a backbend against a wall. In a journal he wrote in 1864, he reminisced about his life and experiences.

Martin, who was born in Ellsworth, but grew up in Hampden and Bangor, wrote that because he was lame, he could not carry out some of the feats other boys could -- and others sometimes took advantage of his lameness.

He therefore came up with the feat -- shown in the illustration, taken from page 194 of his journal. He wrote: "I then took a corn Broom and put one hand snug to the floor the right hand at the blade then put my head under the left hand & come up. see outline.

"Keep your left hand snug down to the floor and lets see you do it. Put your head under the left arm and not between them because you can’t come up at all if you do."