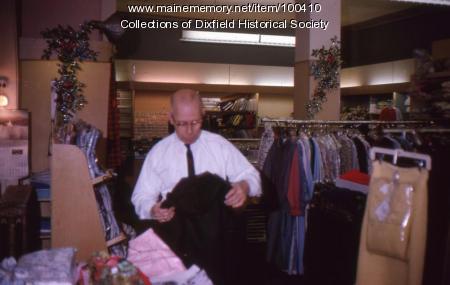 Howard's Drygoods Store provided all manner of clothing, footwear, sewing notions, cloth, and general household items to the townspeople of Dixfield. In this image, Raymond Howard is shown in the clothing section of the store. Many school children got their new school shoes and "Ship n Shore" blouses at Howard's.

For nearly forty years, Raymond and Clara Howard ran the store, and were an important part of Dixfield's commercial community. They participated in many town functions and groups. Raymond retired in 1971 and the store became Dunton's Store. The Harlow block was razed in 1979.