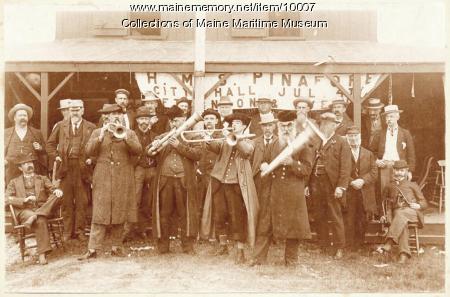 This is a photograph of members of the Venerable Cunner Association and Propeller Club at its 50th anniversary meeting in 1895.

The club held its first meeting on August 7, 1845 at Portland Head Light, where members went to escape from the heat of the city.

They fished, smoked, cooked, ate and drank -- for 25 cents each.

Annual outings were held on the first Tuesday of August, mostly at Portland Head Light, although they met on Diamond Island a few times in the 1850s.

In the 1880s the club decided to move permanently to Long Point in Cape Elizabeth.